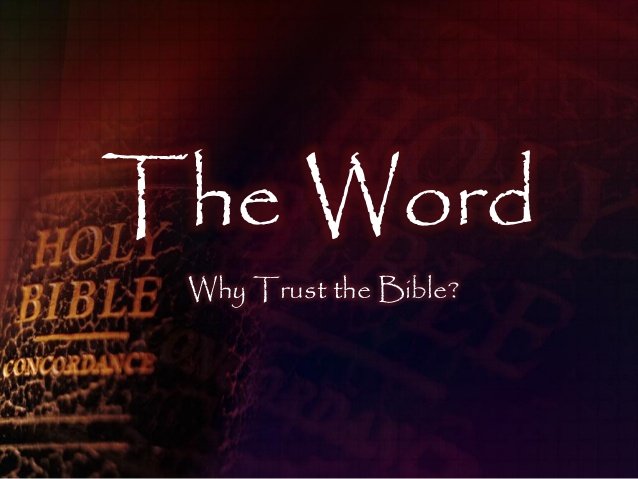 WHY SHOULD I TRUST THE BIBLE?

How can I answer that person who questions my trust in the Word of God?

The following 4 reasons are listed to help us explain why we believe the Bible is the inspired Word of God. The first three are the criteria used by historians when assessing the reliability of a document – 1) Time Gap 2) Consistency 3) Volume/Dating Manuscripts

The period of time between the events described and the date of writing is uniquely small. The events occurred between AD27-AD62 (start Jesus’ ministry – Death Paul) with the first book of the Bible being written around AD50 (Galatians).

Scholars now believe that the documents of the New Testament (with the exception of Revelation) were completed by the year AD69. That means only a 7-year gap exists between the events that the New Testament describes, and the completion of the scriptures. This is a uniquely small gap of time (see table below).

As will be seen, the New Testament has been preserved in almost 6,000 known Greek documents, yet the agreement among these manuscripts is rated as 99.5% e.g. the degree of difference is extraordinarily small (Christian Apologetics & Research Ministry, CARM).

The amount of New Testament Manuscripts is also unique and by far superior when compared to any work of antiquity. There are around 5,300 Greek manuscripts and over 29,000 manuscripts in total which have either be found or unearthed which correspond almost exactly to the writings we have today, as described above 99.5%.

The dating of our earliest extant manuscripts is also unique. The John Ryland’s Fragment (P52) is dated to between 110-130AD.

The Manuscript is held in the University of Manchester and contains part of the gospel of John. There is some debate over the dating, however given that this is a copy, or a copy of a copy, the original would likely have been much earlier again.

Below is a table showing the comparison with other well-known writings. As can be seen, there really is no comparison! 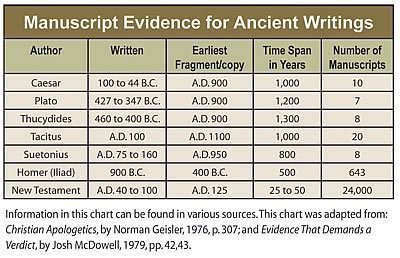 Ok, so we have established that the copied text is reliable and trustworthy as it has been handed down to us, but how do we know that the message itself is inspired by God. This again is where the Bible comes into its own and again is unique amongst comparable works.

The Bible contains in the region of 2,500 prophecies of which over 2,000 have already been fulfilled. The most popular being the messianic prophecies in Isaiah 53 and Psalm 22 written 700-1000 years before Christ was born containing information which could only be referring to Jesus Christ. Other prophecies contain specific details regarding the number of years to the coming of the messiah which should convert even the most hardened skeptic.

As said above, the first three responses are what historians look at when deciding on the reliability of any ancient document. The Bible passes the test in first place!!!

You may have spotted it but I have devised a simple way to remember the above headings. The first letters of each are as follows: T.I.M.E

When considering how God has given us his Word then think of the Word T.I.M.E as a way of remembering the evidence. God gave us his Word at the right moment in TIME (e.g. the dying out of miraculous gifts, coming and ascension of Jesus), see Hebrews 1:1-3 below.

“In the past God spoke to our ancestors through the prophets at many times and in various ways, but in these last days he has spoken to us by his Son, whom he appointed heir of all things, and through whom also he made the universe.”